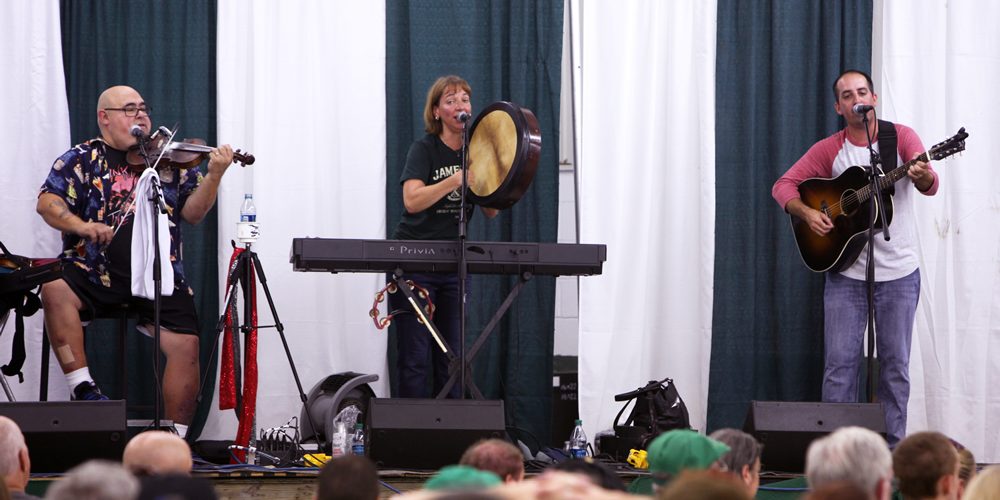 For nearly 19 years, Paul Baker and Peggy Goonan-Baker have brought an eclectic and entertaining collection of music to the stage. Formed in 1996, Brigid’s Cross has played it all: true-toheritage traditional Celtic folk, contemporary Irish music, country, rock, alternative, and originals.

Audiences are pulled into a vortex of musicianship, humor, high energy and audience participation when they see a BC performance.

Currently, Brigid’s Cross mostly performs as a two piece. Paul is the Master of Ceremonies, and a master violinist, to boot. He has been performing professionally for 34 years, and his talent and experience certainly shine. Peggy and Paul are both strong singers, and Peggy plays keyboards, bodhran and other percussion.

Their stage banter together is often said to be one of the most entertaining parts of the show. They often utilize technology to fill out their sound, frequently using backing guitar tracks featuring their mostly retired guitarist, and nephew, Richie Reece. Occasionally, Richie still joins them onstage for certain fesitvals and for rare shows at the family’s four pubs (The Hooley House.) When Richie makes the scene, he adds his solid vocals and strong rhythm guitar style to the mix. Often, Peggy’s father Dick Goonan (aka The Rooster) joins the band onstage for some great vocal performances and for some funny songs, making three generations of family music onstage.

It has been quite a road of evolution for Brigid’s Cross since their first festival performance at the Riverfront Irish Festival in Cuyahoga Falls, Ohio, some nineteen years ago. BC has performed at festivals, concert venues, and pubs all over America. Then in 2002, when Richie joined the band, they began traveling even more, taking their act to Ireland to rave reviews. This resulted in several return appearances in some of Ireland’s finest music rooms, and also 2 appearances at the Brian Boru Festival in Killaloe, CO Clare, IRE. On either side of the “pond,” audiences have come to expect a high-energy performance and are given it without fail.

Brigid’s Cross spends lots of time traveling in the summer to great spots like Tara’s Family Pub on the shores of the Atlantic in Matunuck,RI, and to many Irish festivals across the US. When they are not traveling, they are spending time in their hometown of Cleveland, OH, playing great local venues. In the colder months, Paul and Peggy play a very busy schedule on Florida’s Gulf Coast. They perform regularly at The Bridge Tender in Bradenton Beach, FL and at the Celtic Ray in Punta Gorda, FL, and they now spend approximately 5 months out of the year in beautiful, sunny FL! They have also performed on many cruises over the years, and look forward to hosting their own cruise in 2016, which has sold out already!

Brigid’s Cross is the proud recipient of the Irish Music Association’s 2008 award for Top Traditional Group in Festival, Pub and Concert Setting, and have won numerous other awards for their music throughout the years. They have also performed on television and radio many times here in the States and in Ireland.

In 2011, the trio released their 11th cd, “In the House”, featuring some live tracks, and some studio tracks. They are currently working on cd number 12.

They have created quite a cult following along the way: friends and fans come to the shows wearing t-shirts with the latest hip tribute to a frothy pint and sporting temporary tattoos of the BC logo. They even have Cross Coozies to keep their drinks cool, and they know all the words to all the songs. Average ages range from 1 to 100. They’re global, stretching across the United States to Irish shores, Canada and Mexico, and they all have something in common – their love of Brigid’s Cross. All have been indoctrinated into the BC world, providing the audience participation that is such an integral part of a Brigid’s Cross show. BC followers meet at shows and festivals and on social media, and they are very friendly, so come on out and join them.