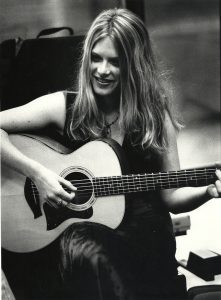 Born in Lawrence, Kansas, Ashley began performing live throughout the Midwest region at the age of 14. Four years later, she began her undergraduate study at Nashville’s Belmont University, taking advantage of Belmont’s renowned music program and studying literature from the Irish, British and Latin traditions, while also performing solo at many of Nashville’s pubs and venues, including the legendary Bluebird Café. Pursuing a graduate degree from the Irish World Academy of Music & Dance (then known as the “World Music Centre”) at the University of Limerick, Ashley then earned her Master’s degree under the direction of Mícheál Ó Súilleabháin. In 2006, she journeyed to the Isle of Man, where she was an Artist in Residence, capturing and recording the native Manx language, as well as the melodies and stories of the island. Another of the singer-songwriter’s unique musical adventures was a stint in Las Vegas, where she was chosen as the soloist for the Vegas premiere of Michael Flatley’s “Lord of the Dance.” Ashley spent one year with the show. In 2010, she was named one of the most influential Irish-Americans under the age of 40.

There is no greater testament to her formidable talent, perhaps, than the invitation Ashley received from the head of the Grammy Museum to teach world music songwriting for the Grammy camps around the country. The program chooses the most talented high school students to whom she teaches the unconventional but most traditional technique of songwriting.  “I want young writers to be able to open up and write from a true place because that’s where the good music is going to come from,” she explains. “Not to try and conform; and to see themselves. I really believe in reading, and having a heavy, steady diet of reading. That’s one of the things that I say, that as many of those words that you’re putting on a page each day, you need to replenish in your head so that you have a constant well of fresh water to draw from.”

And although she continues to be an advocate for the educational pursuits of others, “Night Travels” has itself been a genuine learning experience for the singer herself.  “On my other albums I would have been more cerebral, more academic,” she offers. “This one I really let go and allowed myself to understand that sometimes simplicity is elegance.”